If you’ve lived here a while you may be familiar with the Opus Dei, or maybe heard something in passing about this organisation. What is little discussed is that this religious organisation is often the power and the money behind government, administration, education and hospitals.

You may have heard of Opus Dei in the film and book by Dan Brown, “The Da Vinci Code” which painted the organisation in a negative light as one of the players that controls the running of many institutions, the truth is not so far from fiction.

Opus Dei was founded by a Catholic priest, Josemaría Escrivá de Balaguer, on 2 October 1928 in Madrid, Spain. According to Escrivá, he experienced a vision in which he foresaw the founding of an organisation with the name “Opus Dei”, which in Latin means “Work of God”, Escrivá described Opus Dei’s mission as a way of helping ordinary Christians “to understand that their life… is a way of holiness and evangelization… And to those who grasp this ideal of holiness, the Work offers the spiritual assistance and training they need to put it into practice.”

However, little was known how influential and powerful this organisation would become and how deep its impact would be on the country itself.

Opus Dei and the Elite of Spain

Opus Dei’s influence extends beyond their churches to educational institutions. The group is associated with Spain’s most elite business school, the IESE (part of the University of Navarra), and there are hundreds of schools set up by Opus Dei members. There is no legal or financial relationship between Opus Dei and any of these schools, and less than 1 percent of the students at IESE are members however, many of these institutions are founded on the basis of the religious teachings.

Money is also important.  The numeraries, celibates who mostly have normal jobs but live in Opus centres and make up 20 percent of all members, donate all their savings to Opus-related activities and charities.

The long reach of Opus Dei extends to politics and business, high-powered sponsors of the beatification included Telefonica and el Corte Ingles. Top leaders, CEOs and directors often have an Opus Dei connection and they are prevalent in all government ministries including the Ministry of Defense.

Only one member of Spanish Prime Minister Mariano Rajoy’s conservative cabinet, Interior Minister Jorge Fernandez Diaz, belongs to Opus Dei, in comparison, at least three ministers in the previous Popular Party government of Prime Minister Jose Maria Aznar, president from 1996 to 2004, were members of the group at one time.

Its high powered and influential members include:

Federico Trillo, Ex Minister of Defense and ex-embassador in London.

Benigno Blanco. Ex secretary of State during the government of José María Aznar for 8 years.

Juan José Nieto. Ex Director General of education in the Community of Madrid.

Jesús Pedroche. PP Ex senator del PP and ex president of the Madrid Assembly during the time of Alberto Ruiz-Gallardón. He ended up going to prison for just over two years for his involvement in the Tarjetas Black scandal, where politicians and members of unions spent up to 132 million euros of public money on private expenses.

These are just a small sampling of names from hundreds of members of Opus Dei who have reached staggering heights in their professional careers.

Opus Dei members also were fundamental in the development of Spain’s economic policy in the 1950s and 1960s during the dictatorship of General Francisco Franco.

But Spanish sociologist Alberto Moncada, a former Opus Dei member who has written several books about the group, said Opus Dei “manipulates” its membership figures, which he believes are far lower, he believes that more people have left the group over the past decade than have entered it.

Is Opus Dei a cult?

Daily rituals include prayers, cold showers, mortifications to numb the body and its sensations. Spiritual control occurs through weekly conversations with the director of the centre to detect irregularities and doubts and also to eke out confessions regarding sexuality and sexual desires which are perceived as “impure” and strongly discouraged.

Misogyny is one of the most common accusations against Opus Dei. In 2002, a former member, Isabel de Armas, published Being a Woman in the Opus Dei.The book accused Escriva of misogyny and megalomania, and it ridiculed the organization for marginalizing women members and imposing “complete submission” upon them.

The organisation takes charge of all money and income of their members, and members have to ask for permission to make purchases. One ex-member of Opus Dei said that when she was schooled in an Opus Dei institution, all money that her parents paid passed through the hands of the directors and they had to ask for permission to buy her a pair of shoes.

On the other hand, Opus Dei provides financial assistance to those with large families. They also provide “enchufe” for their members, installing them in government and high-paying posts in various institutions and companies where their members are in the upper echelons.

Amidst the scandals concerning Opus Dei are its implications in cases of child abuse, with its most recent case which emerged in the public eye in 2014 where three Catholic priests and a layman have been arrested by the police in Granada, Spain, charged with the sexual abuse of minors.

The arrests came after Spanish media revealed that Pope Francis had directly intervened in the case of the sexual abuse of a minor by priests in the archdiocese of Granada, Spain, after receiving a letter written by a survivor who later denounced the case to the public prosecutor.

The problem with child abuse in church institutions is an international issue and is not restricted solely to institutions belonging to Opus Dei, indicating a deeper problem amongst Catholic institutions.

The Future of Opus Dei

Is it a dying institution? It is apparent that it’s influence is still far-reaching and pervasive in modern Spanish society. 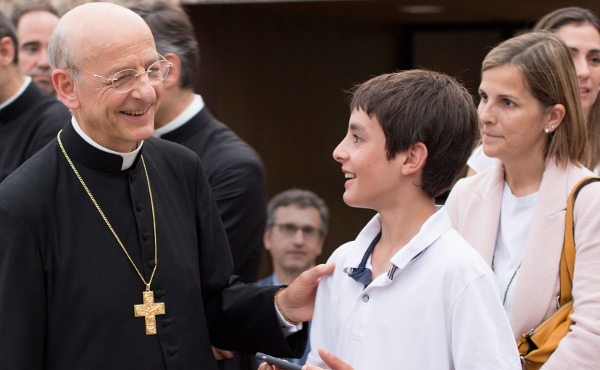 A survey by Centro de Investigaciones Sociológicas in October 2014 showed that 67.8 % of Spanish people describe themselves as Catholic, although only 16.9 % of Spanish people attend mass at least once a month.10.8% define themselves as atheist and a further 16.7% as non-believers. Despite the high numbers of self-declared Catholics, they are often Catholic in name but not in practice. Religion is deeply-entwined in the fabric of Spanish society with church weddings, baptisms and confirmations playing a socially important role in society rather than an ideological one.

Often the strong adherence and religious fervour of celebrations such as Semana Santa are more strongly rooted in tradition than in religious belief, with churches losing more and more active members year upon year.

Younger generations are increasingly veering away from the limitations and restrictions of imposing religions and the growing number of secular youths will bring Spain away from the darkness of its religious past and overbearing influence and into a more progressive future.